What is distance per stroke, how it's measured, improved, and what good and bad scores look like.

What is Distance Per Stroke (DPS)?

Distance per stroke (DPS) is also called Stroke Length and measures how far a swimmer travels with every stroke.

How is it measured?

DPS is the distance spent stroking and the number of strokes over that distance. It starts from the first stroke and ends on the last, so the distance travelled underwater is not included in the avg calculation.

What is a good DPS?

The fastest swimmers across distances share an excellent feel for the water and a low stroke count per lap. That's a direct result of their ability to strike a balance between power and efficiency.

For sprinters, studies have shown that the swimmer who can attain the highest DPS at slower speeds are the same swimmers who go the fastest. For distance swimmers, a higher DPS usually translates to higher swimming efficiency and energy in the tank for later splits as fewer strokes need to be taken, and drag is reduced.

That being said, a high DPS does not translate directly to a higher speed. Too much glide between strokes can cause the swimmer to slow down on every stroke, requiring extra effort to speed up again during the pull to maintain speed. By powering through the water at a faster stroke rate, a swimmer might be able to get faster even while sacrificing DPS.

DPS or Distance per Stroke is measured in meters per second (m/s). Check out the chart below to see where your DPS results sit within the typical ranges for your preferred stroke and pool length. 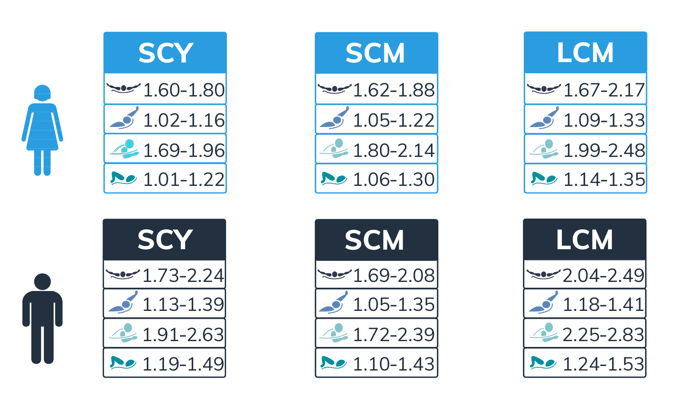 How to Improve Distance Per Stroke?

To generate a high DPS, swimmers need to consistently pull on the water, right from the catch at the front to the exit at the back. They also need to keep a good streamline throughout to reduce drag during the pull and glide between strokes.

If a swimmer's DPS decreases, it could mean: